This project was a product design assignment for a Materials in Design course. It involved creating a working Virtual Reality headset with constraints on design materials and persona. It also required the making of a blog showing the iterations and decisions each team member went through, as well as all deliverables. It can be found here. 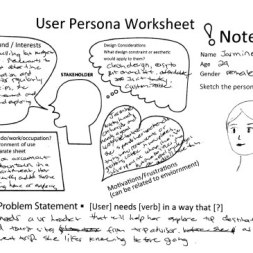 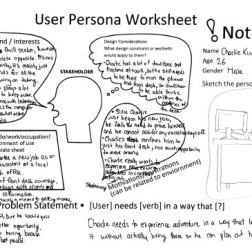 Our first iteration involved each member of our group creating our own personas that we would potentially go forward with for the upcoming weeks. We created our personas based on the potential end-use applications for the VR headsets. We chose Travel as our application type where the users will be able to explore other cultures using the device.

In addition to this, we were given 2 materials from which we had to create our device, one uncommon and the other common. Our materials were plastic (common) and paper (uncommon). Our specific materials were subject to change in the final result. 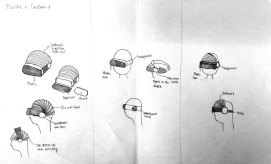 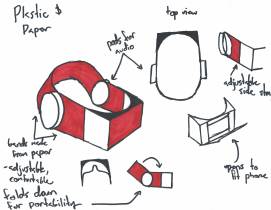 In our second iteration, our team had to prepare 12 initial sketches (3 per person) for our VR headset. We created our designs based on both the materials we were required to use and the persona we had decided on. Upon receiving feedback from our peers and teachers, we decided on two ideas to continue with: the open-faced device holder and a hat-like covering that goes over the head and ear pods for audio feedback.

Based on our final persona, the scenario in which our user will be using this VR headset is in the setting of the persona’s workspace. Charlie is a new employee at a local real estate office branch, his position being an Administrative Assistant. He is responsible for manning the front desk at the office, organizing paperwork and answering phone calls. He finds his job very slow-paced with lots of downtime since not many people stop by the office. The scenario in which Charlie will be using the VR headset is when he can take advantage of this downtime and experience some travel and escapism from the comfort of his desk. 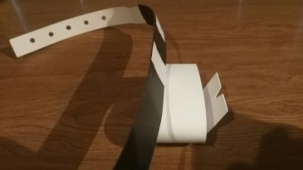 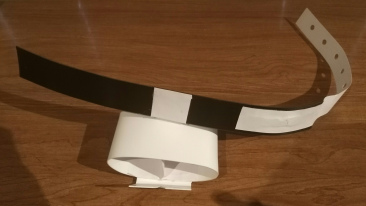 For the third iteration, each member of our group had to make a different 1:2 scaled low-fidelity prototype for our VR design. We used materials similar to the ones to be used in our final prototype including styrene (plain and textured), card, paper, and cork. 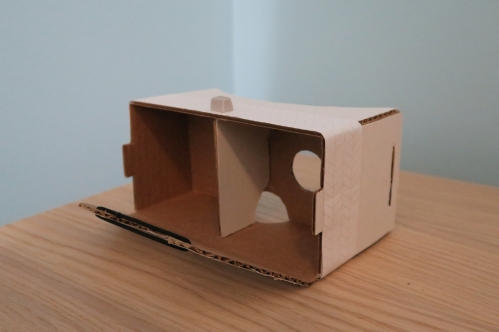 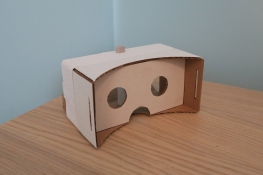 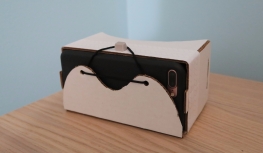 For the fourth iteration, our team decided on optimal materials and design for the final physical product. We also created a scale final prototype, modelled with cardboard, rubber, and an elastic-cotton blend. We decided to go for a rounded rectangular shape in order to fit both the phone screen and the face. A hinged cover with elastic attachment point allows for easy removal of the smartphone and velcro allows for an easily adjustable strap to accommodate head sizes.

1. Polylactic Acid (PLA)
A biodegradable thermoplastic derived from renewable resources like corn starch or sugar cane, frequently used for 3D printing. It has a shiny and smoother appearance.

Where it will be used: The entire frame of the VR headset.

Fabrication method: 3D printed into multiple pieces, then glued together.

2. Corrugated Card Stock
A type of paperboard that is thicker and more durable than writing paper, it’s corrugated on both sides, providing texture. It is lightweight and cost-effective.

Where it will be used: Wrapped around the front half of the headset, including the cover that secures the phone.

Where it will be used: Lined along the back of the headset where the user’s forehead and nose make contact.

Fabrication method: Trimmed with scissors then glued onto the headset.

4. Nylon Fabric Webbing
A strong fabric that’s been woven into a flat webbing strip, commonly used for backpack straps. To allow adjustability, a plastic strap slide would also need to be used with the webbing for fastening.

Where it will be used: The headband, attached to the back of the headset.

Fabrication method: After it is slid into the slits of the headset, two overlapping pieces will be sewed together to secure the headband.

5. Elastic & Stretchy Cotton
A stretchy form of fabric that is lightweight, thin, and flexible. It is often used for tying things together.

Where it will be used: It will be attached to the cover so that the user can use it to secure the phone.

Fabrication method: After it is slid into the two holes on the cover, it will be tied together. 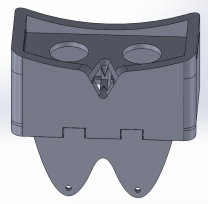 For our fifth iteration, I had the role of creating a 3D model using Solidworks. It was printed using ABS Plastic with water-soluble supports in order to keep the form. 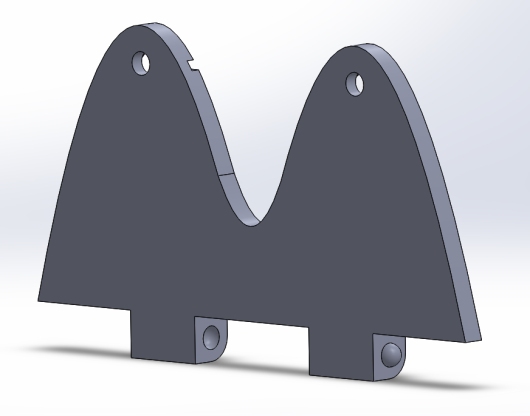 Due to the height, length, and width restrictions, I was printed in three separate pieces and glued together afterwards.

Unfortunately, it did not turn out like we’d expected. We were told that the lab technician printed the walls thicker than we had specified and we noted three major issues with the model:

A number of design details, such as less reinforced walls and a more accepting head shape were noted as well. 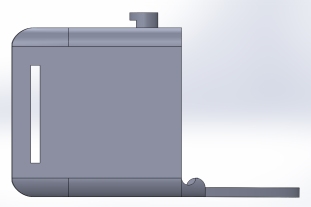 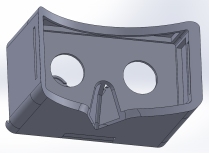 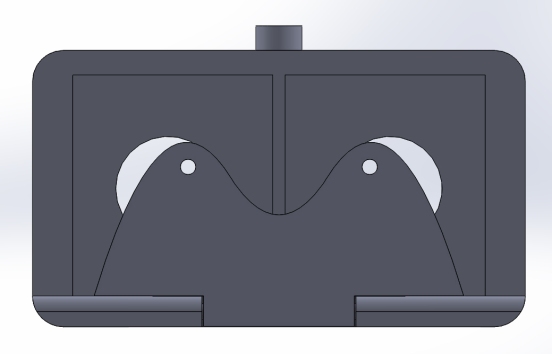 My task leading up to the final iteration was to create a second working version of the 3D printed model, taking into accounts the problems with the first version.

1. I widened the nose fitting and deepened the curve around the forehead in order to make it fit the head better.

2. I took unnecessary material out of the inside of the casing to save space and reduce weight and adjusted the dimensions accordingly.

3. The front flap was adjusted as well to be more aesthetically pleasing and a small divot was made so the smartphone could sit comfortably in the front.

4. I adjusted the holes for the strap, as the one we acquired was a different thickness than used previously.

5. Most importantly, I reduced the hinge from 2 hinges into 1 hinge. Since we are splitting the model in half to print it, the two pieces of the body will allow us to “sandwich” the hinge of the cover, thus avoiding the issue we faced before.

The orthographic view was altered to fit the new considerations as well, and measurement lines were adjusted to fit the engineering standards. 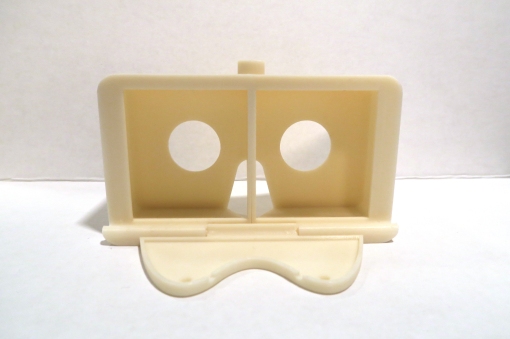 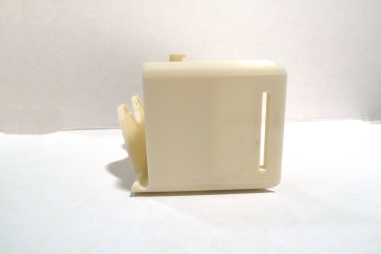 The second version of the 3D model turned out much better. The straps fit into the new holes, the head fit was more comfortable and prevented light getting in, the smartphone fits comfortably inside its bracket, and the sandwich joint mechanism works as planned.

After doing some research, we decided to join our headset with superglue since it would be the thinnest adhesive to apply, which was an important factor since we didn’t want an extremely visible gap between the model. Prior to applying the glue, we sanded down the area to make sure we were attaching the parts with as much surface area as possible. 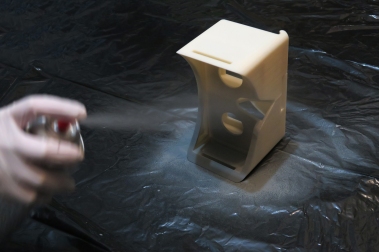 Sewing the Velcro to the strap

We bought a can of Krylon ColorMaster™ Paint + Primer Spray Paint in Smoke Grey. We applied one layer, waited an hour, and applied another to get thick, even coverage. We then knit Velcro onto the elastic headband and attached it to the headset.

Prototyping colours for the decorationg

We glued the corrugated cardstock on to the body using double sided tape and applied folded styrene to the inside of the device where it would touch the nose, forehead, and cheeks. The lenses, which focus your view on the screen of the smartphone, were then glued into place. 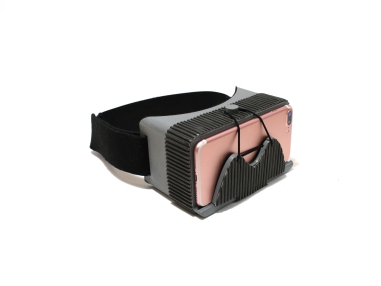 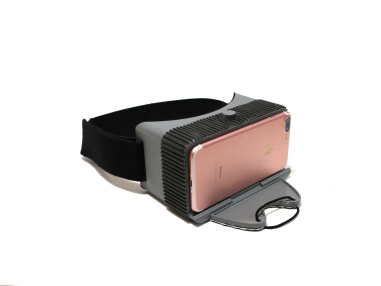 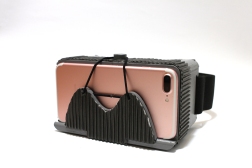 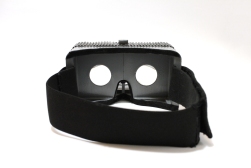 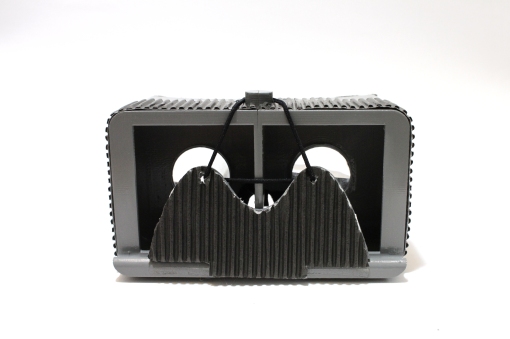 This project lasted over 6 weeks and taught me many things. I was able to develop teamwork and motivational skills. I used Solidworks and Google SketchUp intensively to create the 3D models and had to make subtle adjustments and allowances in order to make it work. I had to sketch, prototype, and built many different models. Research and content for the various iterations of deliverables, as well as ideation and process work, had to be organized and delegated democratically, as we never had a set leader. We made the best of each individual’s skillset and reception during the final presentation of model and poster was very successful.

This site uses Akismet to reduce spam. Learn how your comment data is processed.